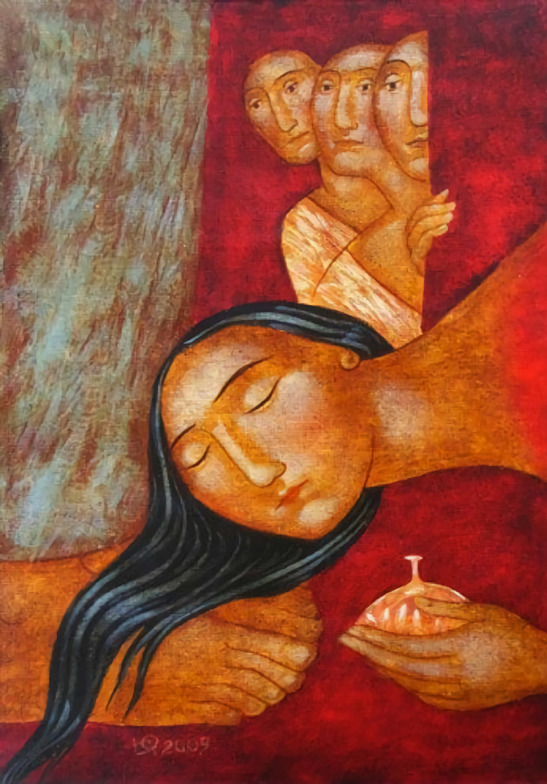 We read Irene Zimmerman's poem Anointings in Bethany as part of our Contemplative 10:00 A.M. Service.

Solemnly, Mary entered the room,
Holding high the alabaster jar.
It gleamed in the lamplight as she circled the room,
Incensing the disciples, blessing Martha’s banquet.
“A splendid table!”  Mary called with her eyes
as she whirled past her sister.

She came to a halt at last before Jesus,
Bowed profoundly and knelt at his feet.
Deftly, she filled her right hand with nard,
Placed the jar on the floor,
Took one foot in her hands
And moved fragrant fingers across his instep.

Over and over she made the journey
From heel to toes, thanking him
For every step he had made
On Judea’s stony hills,
For every stop at their home,
For bringing back Lazarus.

She poured out more nard
Took his other foot in her hands
And started again with strong, rhythmic strokes.
She felt her hands’ heat draw out his tiredness,
Take away the rebuffs he had known –
The shut doors, the shut hearts.

Energy flowed like a river between them.
His saturated skin gleamed with oil.
She had no towel!

In an instant she pulled off her veil,
Pulled the pins from her hair
Shook it out till it fell in cascades,
And once more cradled each foot,
Dried the ankles, the insteps,
Drew the strands between his toes.

Without warning, Judas Iscariot
Spat out his anger, the words hissing
Like lightning above her unveiled head:
“why was this perfume not sold
for three hundred denarii
and the money given to the poor?”

“Leave her alone!”
Jesus silenced the usurper.
“She bought it so that she might keep it
for the day of my burial.”

The words poured like oil,
Anointing her from head to foot.

Nov 21 @ 2:30pm A Vigil for British Columbia Handcrafted Cards are Back at St. Hilda's