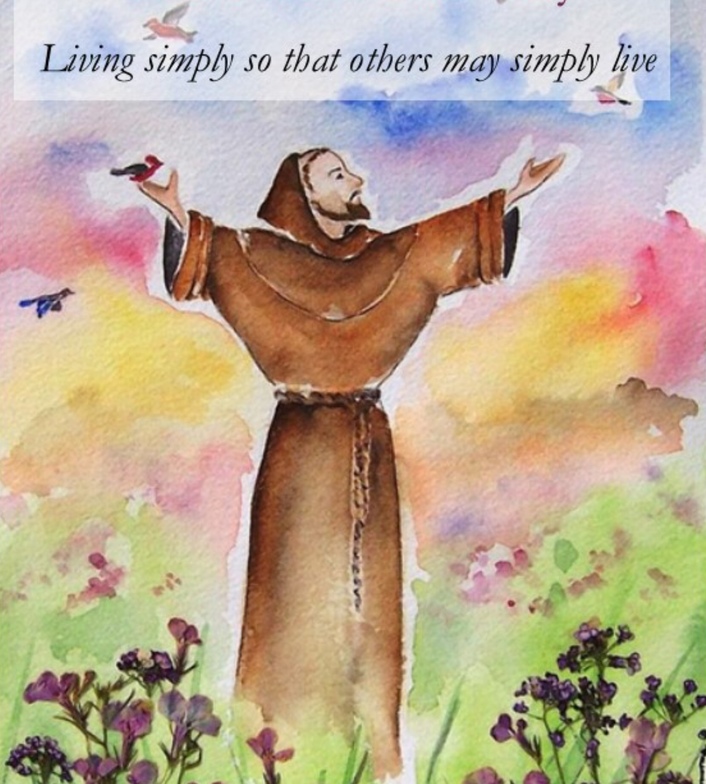 Today’s readings and reflection centred on the Franciscan Way of living simply, ethically and honouring creation.  The following reflection was led by parishioner Mike Starr.

This morning, the birds seem to be celebrating the Feast of St. Francis! At our house, dozens of birds are enjoying the berries on our two Mountain Ash trees, and making quite a commotion!

One of Francis’ insights was that we humans are not separate from creation. This insight is not unique to Francis; other Christian mystics, wise people from other religions, and indeed a common Indigenous worldview, have said the same thing. Francis was one of the rare ones who lived out this belief. You may know of the many stories of his loving interactions with animals, including those we would consider dangerous animals. We just sang his “Canticle of the Sun”, in which he expresses a
familial relationship with all of creation.

Francis also spoke about money. He wanted to be the poorest, and he wanted his followers, “poor friars” to be the poorest. He and his friars would work at manual labour to provide the necessities of life, but when there was no work available they would beg. However, Francis didn’t want them to accept money, only food and goods. As we heard in the second reading, Paul told the Galatians, “My interest in this world has been crucified.” Remember Richard Rohr’s definition, from the first reading, of “the world”, as “the system”, the world’s way of doing things. Francis would say, “I have no interest in participating in the quest for more material wealth that most of the world considers so important.”

In the gospel reading, Jesus says, “So do not worry, saying, ‘What shall we eat?’ or ‘What shall we drink?’ or ‘What shall we wear?’ For the pagans run after these things, and your heavenly Father knows that you need them.” I think “pagans” in this context means the same as “the world” - the way of doing things that both Paul and Francis rejected.

Obviously, our society has not followed Jesus’ teaching, nor the examples of Paul and Francis. Our world acts as the “pagans” in Jesus’ words, “running after” the things that are less important. Yes, we need food, clothing, and shelter, and God knows we need them, but we don’t have to “run after” these things. But in our society we don’t stop when we have enough food, or enough clothing; we always run after more. More clothes than we will ever wear, more expensive food, imported from far away. We could add to Jesus list of things that “the world” prizes: more expensive cars, larger houses, and fame. To a large extent, we Christians, instead of rejecting this worldly system of
values, have bought into it wholeheartedly. As a result of our excesses, our beautiful world is filling up with garbage, which is poisoning the land, the plants and animals, and humans as well.

What can we do? How do we as Christians respond? What would Francis do?
“Reduce, reuse, and recycle.”
We have heard this phrase many times, but did you know that the words are in this order for a reason? Many people make an effort to recycle, and think they have completed their obligation to the environment, and recycling is good, but reusing is better, and reducing is the best. Francis could be called the patron saint of reducing. He had one set of simple clothing that he wore until it fell apart. He reused other people’s used clothing and goods, and often gave away his own goods so others could reuse them.

This is quite radical, and not many people are able to make a transition as drastic as this all at once. I will suggest some ways of taking steps in this direction, following Francis, Jesus, and Paul.

There are many other actions that we can take to walk more lightly on the earth, enabling others to continue their walk on earth. There is a poem that expresses the anguish about our misuse of the earth, but also gives hope - seeing God’s grandeur breaking through in spite of everything. Gerard Manley Hopkins wrote it over a hundred years ago, but it still seems relevant.

Poem by Gerald Manley Hopkins Gods Grandeur read.  Click on the link to see and hear the poem.  God’s Grandeur

Sources: Quote from Fr. John Dear about the Franciscan Way.
Francis embodies the Gospel journey from violence to non-violence, wealth to poverty, power to powerlessness, selfishness to selfless service, pride to humility, indifference to love, cruelty to compassion, vengeance to forgiveness, revenge to reconciliation, war to peace, killing enemies to loving enemies. More than any other Christian, he epitomizes discipleship to Jesus. . . .
Francis’ logic points the way toward personal, social, and global justice and peace. If each one of us practiced Gospel simplicity, voluntary poverty, and downward mobility, like Francis, we would share the world’s resources with one another, have nothing to fear from others, and live in peace with everyone.