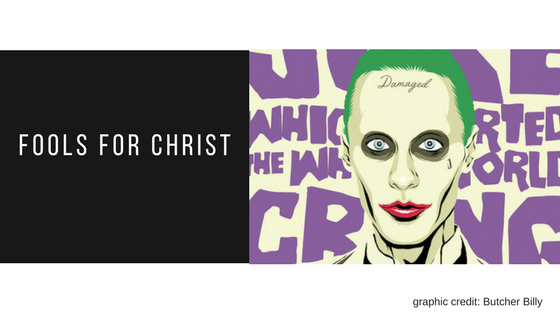 For the message about the cross is foolishness to those who are perishing, but to us who are being saved it is the power of God. ~ 1 Corinthians 1.18

My friends in Christ, do you consider yourself to be wise?  There is no need to be polite or too self-effacing simply because I’m the guest here today.  My given Chinese name at birth is 穎安 (romanization: Wing On). The character Wing means intelligent, and the character On means safe or safety.  So as far as my parents are concerned, they hoped that their son will grow up being wise and safe.

My guess is that some of you, or perhaps many of you are wise, judging from your gray hair, or for others, the lack of hair itself.  And I don’t mean wise in the worldly sense, but being wise, mature, or maturing Christians.  Few of you are new on your Christian journey.  You have seen a lot, experienced a lot more, battled with your demons, survived the schisms (or if that’s too loaded a word, the church-dramas).  You are wise in the most respectable sense as if a native person would honour his/her elders.    Perhaps to some being wise doesn’t really sit well with you for you are called, as Paul urges us in his letter to the Christians in Corinth, to be fools for Christ.  You were raised in the good old tradition that puts little trust in human intellect for the best of human knowledge ends up in pride.  It is much better to trust solely and wholly on the authority of Holy Scripture, which contains all things necessary for salvation.

The Bee Gees released this song, ‘I Started the Joke’, 3 years before I was born and it was an instant hit.  There was something about this haunting melody that struck a chord almost immediately, to begin with.  Still, I believe it’s the lyrics that acknowledge the irony and ambiguity of what’s happening in the world and in people’s lives that made the song a spiritual classic.  The spiritual depth of the song reaches a climax in the last stanza:

Dying as a doorway to life for the whole world.  So unseemly.  Such a contradiction to the good life of power, success, and control which is ingrained in our DNAs and the world that we live in.  Is this life a joke?  Or is Jesus’ life a joke instead? You look at him, making himself a fool in the Temple in Jerusalem.  Driving people out and overturning tables in God’s house?  Such temper tantrum even for the Son of God.  Would his parent come and discipline him in private, please?  And you probably can understand why people get really upset hearing what he said—an attack on the business model of Temple Inc., and a threat to dismantle the heart of Israel’s religious and national identity.

Gil Baillie, an author of Christian theology who is also a Professor of Law and founding member of the Colloquium on Violence and Religion offered some insightful comments on this story in John:

Jesus says, 'You have used the sacrificial system up to this moment to stay sane and civil. I'm now going to take it away from you. You're now going to have trouble staying sane and civil. I'm going to give you another way, and that is to fall in love with me, to follow me.' Not out of some piety, or 'wouldn't it be nice, or 'isn't he a lovely guy,' or even 'he's God's incarnation.' No, it's the alternative to the anthropology that we humans have lived with since the beginning of culture.

You’re joking, Jesus, aren’t you.  No. It’s true.  In fact, this is the ‘Good News’.  The wisdom of God appears to be the joke of the world, only that their laughter will soon be silenced in the face of the cross and the empty tomb and a risen Christ who resists pointing his finger to seek a sweet revenge.  Jesus the Scapegoat became the Lamb of God whose blood washes clear our eyes so that we can finally see the violence which we did to others was violence against God and against God’s love.  Jesus rose to speak peace and offer forgiveness to all of us who are complicit in pointing fingers at each other or to find someone to scapegoat so that we may live in the peace of status quo in our religious institution of every age and refuse to welcome the stranger who is different from who we are, what we are used to, or what our biblical imagination would allow us to.

Friends, I was invited here today to share with you how my biblical imagination was stretched, I believe for the better, to make room for myself, my brokenness, and ultimately to make room for God who loves me too.  Through this narrow doorway where every Sunday School understanding of God and God’s love was challenged, transformed, and reconfigured, I found myself living in a broad spacious place where I no longer find myself feeling suffocated in a crowded tight church with space for only a few righteous ones.  I am finding myself in a spacious church as big as the whole Planet Earth or even the whole universe where there is room for every stranger of many colours and cultures, creeds and languages.  Most importantly, a church where there is enough room for joy.

I guess, after all, Jesus is a joker and as long as we laugh at his jokes and not take offense at them we are alright.  For his Father, who is our Father and Mother in heaven desire to make more room for joy in the Church and in the world which God loves.